Home » Porthgain – An Industrial Heritage in such a Pretty Place

Porthgain is a few miles north of St David’s, and 12 miles from Fishguard within the Pembrokeshire Coastal National Park’s Conservation Area.  The village grew out of the necessity of its industrial heritage.

The machine house of the adjacent brickworks is now a trendy wine bar and the pub The Sloop Inn is reputed to have once been a smugglers haunt. These days there are art galleries, and the Sloop Inn is a destination pub known for its great food.

However, Porthgain was once a commercial harbour that was used to export slate, then brick, and then granite stone from the nearby quarry.  The granite loading must have been quite a sight as it was dispensed from massive brick hoppers straight into the small ships alongside the harbour. The harbour may be small, but it is naturally deep, making it an ideal location for loading large ships. 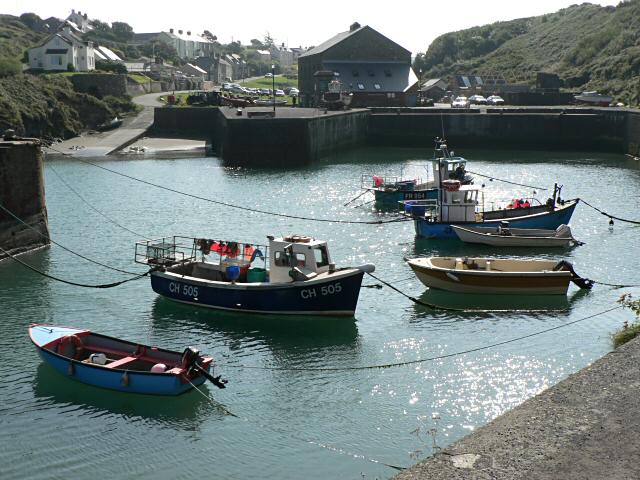 There was also a narrow-gauge railway to transport rock from the Pen Clegyr and St Bride’s quarries to Porthgain. The roadstone business closed in 1931.  Today, the signs of the industrial past of the village are evident to see, and the heritage adds interest to the location and the landscape. Some of the old cottages are available to see, including prefabricated houses that were brought to the area by sea.

It’s a small location; the old cottages are mostly set back behind an expanse of recreational green space.  Porthgain was owned by the company which ran and operated the harbour. However, it was bought by the village residents as a “town trust” in partnership with the Pembrokeshire National Park authority.

The remaining industrial buildings and all the quarrying remnants and activity evidence have been designated as a Scheduled Ancient Monument, and are part of the Pembrokeshire Coast National Park.

What makes Porthgain special is that it is so untypical of a lot of the other locations you could visit in Wales. It’s a testament of its industrial heritage and today that harsh industrial landscape is softened and the industrial buildings sit well in the landscape. The unusual location is nevertheless beautiful, and this once industrial village harbour has once again returned to fishing, with day boats going out to catch lobster.  Meanwhile, on land, the village has a destination pub, a wine bar and art galleries.  There is something incompatible about that and yet… that’s what it is.