The beadlet anemone is a dark red sea anemone with a stocky body and short, thick tentacles. It grows to 5 cm in diameter and sometimes has bright blue spots below the tentacles. 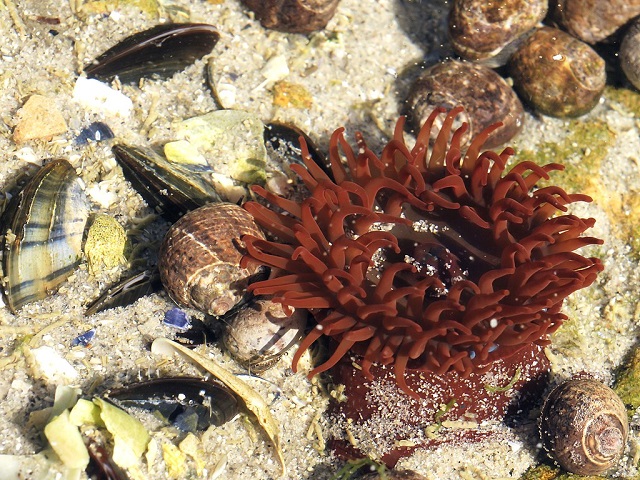 The snakelocks anemone has long, bright green tentacles with purple tips, and a greyish-green body. It grows to 8 cm in diameter.

Dead man’s fingers are a type of soft coral known for having fleshy, finger-like structures which grow in irregular shapes. They reach 20 cm in height and are usually pale or orange in colour.

The pink sea fan is a soft coral that grows with a densely branched stem that is shaped similarly to a fan. The individual polyps grow in warty protuberances and the colonies grow to an average height of 25 cm.

The barrel jellyfish is the largest jellyfish found in UK waters, growing to 1.5 m in diameter. Many only reach 40 cm however, with the species identified by its pale, mushroom-shaped bell and 8 frilly tentacles with violet fringes.

The lion’s mane jellyfish is reddish brown and has a dense tangle of hair-like tentacles which are orange or dark red in colour. They can grow to 50 cm in diameter in the UK, with tentacles that are 3 m long.

Mauve stingers are variable in colour but are often light purple or reddish. They have a dome-shaped, 10 cm bell with warty structures, and thin tentacles which can grow to 3 m in length.

The candy striped flatworm is an elliptical marine flatworm that grows to about 5 cm in length. It is usually a striking yellow colour with dark vertical stripes, but can also be cream-coloured or white.

Lugworms are cylindrical worms which grow to 20 cm in length. They are usually pink or reddish-brown in colour, with segmented bodies and small, feathery gills.

The sea mouse is a very unusual marine worm which is known for having a rounded body that is covered in bristles. It grows to 20 cm in length and is generally brown, though the tips of the bristles are iridescent.

The common limpet is one of the most recognisable marine invertebrates, with a cone-like shell that has radiating ridges. The shell is often yellowish-brown in colour and grows up to 6 cm long.

The edible periwinkle is a marine snail which is recognisable by its rounded, whorled shell – usually brown or grey in colour. It can grow to 5 cm in height and has a dark body.

The orange-clubbed sea slug is a brightly coloured mollusc known for its white body and orange growths which sprout all over its body. It grows to 2 cm in length.

Sea hares are marine snails which possess shells on the inside of their bodies, making them appear similar to sea slugs. They grow to 20 cm long and have reddish-brown bodies and large head tentacles.

The spotted cowrie is a marine snail with a lemon-shaped, pink shell. The shell usually has three dark spots on it and can reach a length of 1 cm.

Common mussels are molluscs with a distinctive, triangular-shaped shell that opens into two halves. The shell is bluish-grey and can grow to 20 cm in length.

Oysters have flattened, oval shells with rough outer surfaces that are usually dark grey in colour. The shells also feature many concentric lines, and can grow to 11 cm in length.

Razors shells are recognisable by their elongated shells which can reach 20 cm in length. The shells are generally brown with pale patches.

The common cuttlefish is a large, squid-like creature that can grow to 45 cm in length. It has a large head with two eyes, and eight tentacle-like arms. It is usually black or brown, with mottled or striped markings.

The common octopus has a large, baggy body with eight long tentacles, each lined with suckers. It can grow to 1.3 m in diameter and is usually brownish-green, though can easily change colour.

Common squids are long, slender creatures with large eyes and 8 arms. They usually have reddish-brown markings against a pale background, and grow to lengths of 40 cm.

Common brittlestars have five long, spiny arms that grow to about 5 cm in length. They are often grey or brown in colour, though some may have blue or yellow markings.

The common starfish is a chunky starfish with five arms which can grow to around 30 cm long. It is variable in colour but is normally orange or pale brown.

Common sunstars are large starfish, growing to 35 cm in diameter. They have 10 – 12 short arms and are usually seen in orange or reddish colours, with concentric bands of yellow, pink or white.

The cushion star is recognisable for its classic star shape, with five short arms. It grows to about 5 cm in diameter and is usually brown or orange in colour, though this can vary widely.

The edible sea urchin is the largest of the UK’s urchins, reaching up to 15 cm in diameter. Its spherical body is pinkish-purple in colour and covered in many short spines.

The golf ball sponge is a spherical sponge with a warty surface. It is normally orange or yellowish in colour and grows to diameters of 10 cm.

Lightbulb sea squirts are barrel-shaped animals with sac-like bodies, covered in a transparent protective layer. They grow to 2 cm in height and have bright internal organs which give them their name.

The mermaid’s glove is a soft sponge that grows with many finger-like branches, which are variable in colour but are usually pink, pale or green. It can reach 30 cm in height.

The star ascidian is made up of a colony of individual animals and forms a flat, gelatinous structure. Colonies come in many colours but can be identified by their striking star-like patterns.