Porthdinllaen is a village on the Llyn Peninsula in Gwynedd and is approximately 20 miles to the west of Portmerion.

The Llyn Peninsula is one of the most remote and unspoilt stretches of coastline in Wales and Porthdinllaen is a small settlement on the right-hand side of the Peninsula that is incredibly beautiful and tranquil.  It’s an old fishing village nestled at the water’s edge in a small natural bay that creates a natural harbour and gives shelter.  It’s a well known shelter spot for ships and boats to shelter from the storms coming from the other side of the peninsular. Day boats still go out from the village, and the boats are moored in the bay.  During high tides, the sea laps at the houses and when the tide is out a beautiful sandy beach is found there in front of the houses. 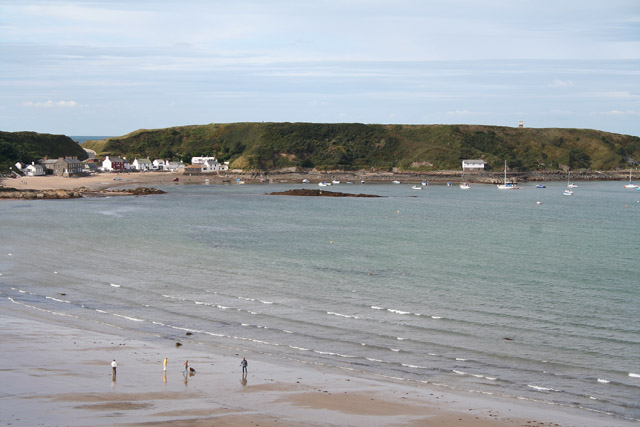 The area has been owned by the National Trust since 1994, and there are little more than 20 buildings there in all with the pub Tŷ Coch being central to the village.  Parking is not at the water’s edge, residents and visitors park in a car park a short way up the lane on higher ground. However, residents can apply for permits to park further down.

There is an Iron Age Hill Fort Trwyn Dinllaen on the headland that dates back to around 100BC. But it’s hard to find due to the golf course that dominates the peninsular.

The village was used in the 2004 film Half Light starring Demi Moore.

The culture of the area is an important aspect of making it special; the heritage is preserved with 80% of the people in the locality speaking Welsh as their first language.  It’s an excellent place for wildlife and marine conservation too. The sea around there has been designated a Special Area of Conservation, and the coastline is a Site of Special Scientific Interest (SSI) due to the large variety of sea and birdlife they support. There is a small colony of grey seals, and you may see them and other wildlife.

What makes the village special is the way it’s nestled into the hillside on the rugged Llyn Peninsular.  Despite the golf course and the town of Morfa Nefyn that you go through to get there, there is definitely a feeling of remoteness to the location and the view of the little fishing boats bobbing about when at anchor is reassuringly beautiful.  That said, the views from the Llyn Peninsular are far-reaching, and you can see for miles in all directions.