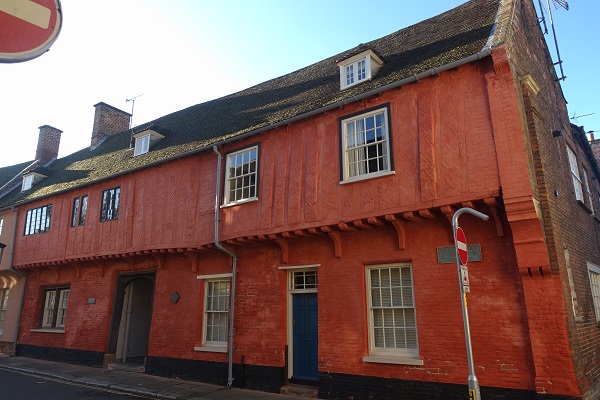 If you are planning a visit to the Norfolk Coast, then you will most definitely want to spend some time in King’s Lynn, especially if you fancy maritime history, for which the town has gained fame for as long as it exists.

If you didn’t know it already, King’s Lynn began as a small fishing village that historians trace back to the 11th Century. From a small settlement the Bishop de Losinga established the town, period from which archaeologists found structures related to the salt trade in a recent dig. At that time, the city was given the name of Bishop’s Lynn (Lynn meaning a body of water).

It then continued to develop its maritime infrastructures for three centuries, and flourished with trade & fishing as its amazing situation on the estuary was very easy to move goods by the river and the sea, making it very quickly one of the biggest port in the area. By the end of the 17th century, Its fame had peaked and it grew in size so ships were coming all year long and more ships were built nearby in Millfleet, which is part of modern-day King’s Lynn, leading to increased maritime activity in the town.

In 1733 a sailor from King’s Lynn, bought a small vessel and equipped it for whaling. He was joined by two colleagues and together they sailed into the Arctic where they hunted bowhead whales. The venture was successful enough to encourage others to try their luck in the trade every year in March for a long time.
If you find yourself in the area, be sure to visit this wonderful city along the Norfolk Coast, so rich in history and architecture wonders as these few examples show:

Unmissable in the City, this was one of Lynn’s most important building since all the goods were transiting through it. It was commissioned by Sir John Turner, MP but also Mayor of Lynn (who lived next to it) and was built in 1683 after the design of architect Henry Bell to be a merchant’s exchange, a close fellow of Turner’s. If the building is today a bit different from Bell’s original construction because of the passage of time and weather, it remains one of the most iconic monuments in Lynn and reminds us of the Dutch inspiration at that time. The Purfleet, on the other hand, was recently revealed to be three times the size that is today during the medieval period, which gives you an idea of how many boats could actually be there. 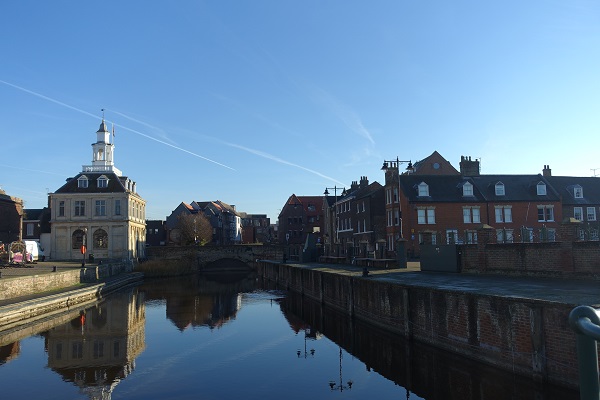 (The Customs House is open on Wednesdays & Saturdays only)

Now that you know about the Customs house, you cannot miss King’s Street which still harbours a lot of ancient buildings representative of Lynn’s glorious past such as Sir John Turner’s house and will lead you to the former Corn Exchange (now a theatre) on Tuesday Market Place

Clifton House is a must-see in King’s Lynn, as it is probably one of the oldest buildings in the city; There are some parts which dates back to the origins of King’s Lynn. This was the house of a wine merchant during the 17th century, which has some very distinctive features such as a 14th century vaulted undercroft in which you can imagine all the goods were stored but also a fivestorey Elizabethan tower, all embellished by the flourishing period of the city with the work of Henry Bell in 1700 on a series of rooms in this wonderful construction.

Kings Lynn had become such a famous place for trade by the end of the 15th Century that it started to attract a lot of merchants from different nationalities to set sails to the Norfolk Coast, and a lot of them settled in King’s Lynn to set up shop and Hanse House is probably the best example that remains today. You can also catch an exhibition on the first floor from time to time

True’s Yard’s Fisherfolk Museum is dedicated to the people who lived and worked as fishermen and located in the last surviving fisherfolk yard in the Lynn, you will be able to discover the history of the lives of local fishermen, the last Victorian smokehouse of the city and other artefacts as well as enjoy a cup of tea in one of the tea rooms

Marriott’s Warehouse was built as a Tudor warehouse, around the 1580s by one of East Anglia’s wealthiest corn and sail merchants: Thomas Claybourne. Until the 1830s the building was actually on the riverbank but works made at that time made the river turn and created South Quay.

But King’s Lynn is also worth visiting because of other historical maritime sites like The Merchants House, St Margaret’s Church (dating back to 12th century), the remains of the mercantile wharfs and warehouses, South Quay which used to be home to a medieval friary etc.

From the 11th century, King’s Lynn’s history has been a constant development towards maritime activity and history has proven it to be a very successful endeavour thanks to the geographical situation of the original settlement, making Lynn, in a,short period of time one of England’s richest cities at its apogee and the pride of the Norfolk Coast.

All in all, it is safe to say that maritime heritage in King’s Lynn is wonderfully rich and extensive. There are numerous museums, exhibitions, and sites where you could discover more of its maritime past and certainly a must do during a trip to the Norfolk Coast!

No wonder that today the city attracts so many visitors from all over the world, as its history is entangled with so many cultures due to the extensive maritime trade that took place.

See King’s Lynn as a family trip as the qualities of the city will with no doubt make adults & children love the stories that made it what it is today, learning the maritime way of life of such a historical place.

George Vancouver, native from King’s Lynn and whose father ran the Customs House (contrary to the rumours linking Admiral Nelson to Lynn), could only be so proud!