Home » The End of the Road – Dunnet Head 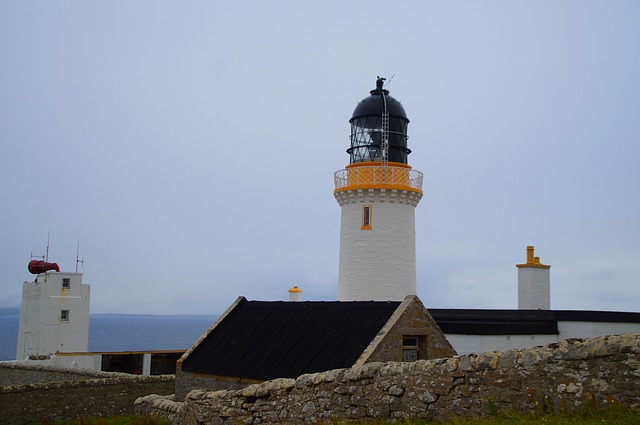 If you travel as far north as you can on the British mainland, you will end up at a small peninsula known as Dunnet Head. There is a rocky headland here called Easter Head which, contrary to popular opinion, is situated further north than John o’ Groats and is therefore the most northerly point on the mainland. The landscape here is wild and untamed and offers dramatic coastal views, along with the chance to see the Orkney Isles on a clear day. While it can worth a visit to Dunnet Head just for its geographical milestone, the area has much more to offer besides.

Having been established as a nature reserve by the RSPB, the peninsula is home to diverse coastal heathland and grassland that supports a range of wildlife. The high cliffs are the most prominent feature but there is also a beach and sweeping sand dunes at Dunnet Bay, along with several miles of marked footpaths. The headland was a key strategic position during World War II and the remnants from this period of history are still visible in the form of several military fortifications. These can provide additional points of interest to visitors and there is also a large lighthouse at the end of the headland.

Of the many species that live around Dunnet Head, one of the more interesting animals is the Arctic Skua. The species is also known as the Parasitic Skua or Jaeger – a word derived from the German word for “hunter”. This is down to the bird’s unusual affinity for stealing. While they are capable of  catching insects and small rodents themselves, Arctic Skuas obtain most of their food by identifying other seabirds that have caught fish and then bullying them into giving up their meal. This can often involve dramatic aerial pursuits and occasional aggressive behaviour. Even more maliciously, Arctic Skuas are well-renowned for their tendency to raid the nests of seabirds during the breeding season, feeding on the eggs or young chicks.

This may seem like gruesome behaviour, however the Arctic Skuas have chicks of their own who will starve if not provided with enough food. The species does have a more graceful side, appearing falcon-like when in flight. A summer visitor to Scotland’s shores, the Arctic Skua breeds here before migrating back north for the winter. It is more common than its cousin – the Great Skua – and can be distinguished from this species by its smaller appearance and white plumage. Top tip for spotting Arctic Skuas from Dunnet Head: visit during the summer months when the birds will be nesting on the grassy cliffs.

The cliffs of Dunnet Head are an ideal spot for seabirds to nest during the breeding season and many other species can be found here besides the Skuas. A visit during the spring or summer will be accompanied by the unmistakeable calls of Kittiwakes and the playful behaviour of the local Puffin population. Razorbills and Guillemots will be both be present from March until July, during which time the parent birds will be visible making frantic trips from the ocean to their nests in an effort to provide their chicks with as much food as possible.

Along the beaches, other species to look out for are the Otters. Caithness has a healthy population of this mammal species, with them occasionally being sighted from Dunnet Head. If walking along the beach, finding the remains of crabs or sea urchins can be a sure sign that Otters have been in the area, along with their fishy droppings. Away from the coastline slightly, the grasslands of Dunnet Head will be rich in colour during the spring and summer, with a variety of wildflowers in bloom. Butterflies will be common as a result and some visitors might be lucky enough to spot a Stoat or a Weasel hunting among the undergrowth. Both of these species feed on small mammals and will most often be seen darting across the path. For a chance to stand on the United Kingdom’s most northerly mainland point, Dunnet Head is well worth a visit, especially to experience its thriving seabird colonies.