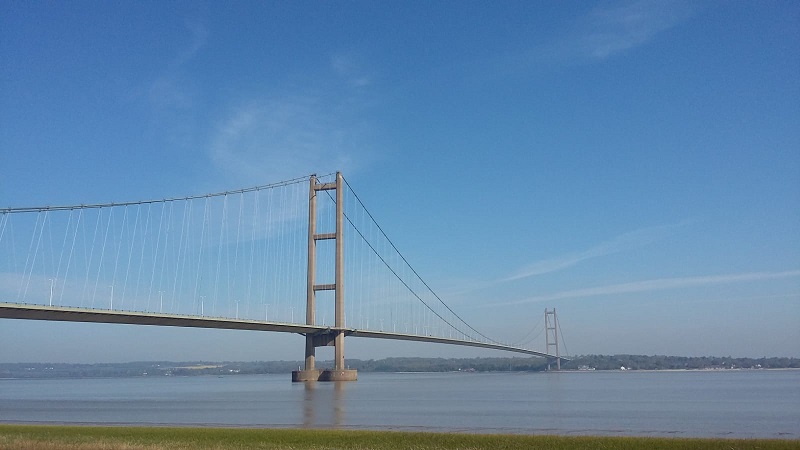 The section of coastline bordering the county of Lincolnshire stretches from The Wash in the south, towards the most inland extent of the River Humber estuary in the north. Most of the coastline, however, borders the North Sea, and is characterised by generally flat land bordering the coast, with marshland and farmland being common landscape features. There are also some coastal towns along the shore, including holiday destinations and industrial towns.

The border between Norfolk and Lincolnshire is located on the southern side of The Wash bay. I have summarised the main features of this bay in the Norfolk article – in short, it is characterised by three rather straight sides, giving the bay a rather rectangular appearance on the map. Both of the Lincolnshire sides – which includes most of the southern side and the entire western side – consist of farmland almost up to the shoreline. Only a narrow band of marshland separates them. Gibraltar Point marks the boundary between The Wash and the North Sea; this consists of a small spit of sand protruding southwards for about 400m (1300 feet), and a sand dune system that reaches up towards Skegness. The coast here is a designated nature reserve [1], and is rather unspoilt by human activity.

The resort town of Skegness is located just to the north of these dunes. This is a very popular resort town on the North Sea, and includes many holiday camps on the outskirts, as well as amusement arcades, restaurants, a pier, and a sandy beach. There is also a fun fair (called the Pleasure Beach Fairground) and a seal sanctuary [2]. There are many places to stay, and the entire 8km (5 mile) section of coastline between Skegness, and the small town of Chapel St. Leonards to the north, is bordered by a holiday resort and many caravan parks.

The beach throughout this stretch is predominantly sandy, and this continues to the north of Chapel St. Leonards. Here, the coast runs along rural farmland – a small, sandy bank forms a barrier between the sea and the farms along the entire coastline, preventing all but the most extreme coastal floods. However, there are some car parks along the coast where visitors can easily access the shore, such as at Mogg’s Eye and Huttoft Beach. To the north of this 10km (6 miles) stretch of coastline are two seaside resort towns: Sutton-on-Sea and Mablethorpe. These have less amenities than Skegness to the south, but both contain a selection of restaurants and pubs. In addition, Mablethorpe also has a small fairground and a seal sanctuary just to the north of the town [3]. The coastline in this area is also notable for another thing, however – the discovery of ancient woodland. After the last Ice Age ended, a large forest existed on surrounding land that was exposed due to the sea level being much lower than it is today. However, when the North Sea level rose around 3,000 years ago, it submerged the tree stumps and covered them in a layer of sediment. However, coastal erosion over the last 100 years has exposed these tree stumps on the beach; remnants of these can be seen, although the stumps themselves are eroded away quite quickly once they are exposed to the elements [4].

The coastline between Mablethorpe, and the town of Cleethorpes 30km (20 miles) to the north, is rather different to the coastline between Mablethorpe and Skegness. This is because, unlike the coast to the south of Maplethorpe, the coastline to the north is shaped by the deposition of sediment. Therefore, larger and more extensive sand dunes exist to the north of Maplethorpe, as well as a larger extent of tidal sand flats. There are also large areas of intermittent marshland. The coastline around Donna Nook is a great example of this type of landscape, with a large coastal nature reserve that attracts many bird species, including large numbers of fieldfare, redwing and starling during the winter months. As is common in parts of the North Sea coast, grey seals are also seen here in large numbers during the winter [5]. However, Donna Nook and the immediate surrounding coastline are also used for Royal Air Force bombing practice, and therefore only parts of the nature reserve are accessible to members of the public at certain times of the year.

About 15km (10 miles) to the north-west of Donna Nook is the seaside town of Cleethorpes. Between these two locations is the mouth of the Humber estuary, a large estuary that extends 62km (38 miles) inland, with Lincolnshire on the southern side and the East Riding of Yorkshire on the northern side. With a small pier, restaurants and even a light railway, Cleethorpes is a typical, quiet, English seaside town. However, directly adjacent to Cleethorpes is the large port town of Grimsby. With a busy harbour with many warehouses straddling its quays, Grimsby has long been a large British fishing hub, with fishing trawlers regularly venturing out into the North Sea even to this day. It therefore comes as no surprise that the town has a large fish market [6], and a fishing heritage centre that is open to the public [7].

As one moves north-westwards along the southern side of the Humber estuary, industry continues to border the coastline, including freight and cargo terminals and even more warehouses. These soon peter out, however, and the estuary returns to its rural state – bordered with farmland and the occasional small village. Next to the small town of Barton-on-Humber is the Humber Bridge, an impressive suspension bridge that opened in 1981. With the aim of connecting the large Lincolnshire towns of Grimsby and Scunthorpe on the southern side of the Humber with the port city of Hull on the northern side, this was the longest single-span suspension bridge in the world when it opened, although this has been surpassed since then. Waters’ Edge Country Park borders the coastline here – this nature reserve provides a habitat for wildlife and a slice of greenery that people can visit [8].

As one travels further westwards, the coastline continues to be bordered by marshlands and the occasional small village, until the Humber estuary divides into two rivers – the Trent and the Ouse. This point also marks the end of the Lincolnshire coastline at the northern edge of the county – the River Ouse marks the border between Lincolnshire and the East Riding of Yorkshire.