Home » One of the best coastlines in the world 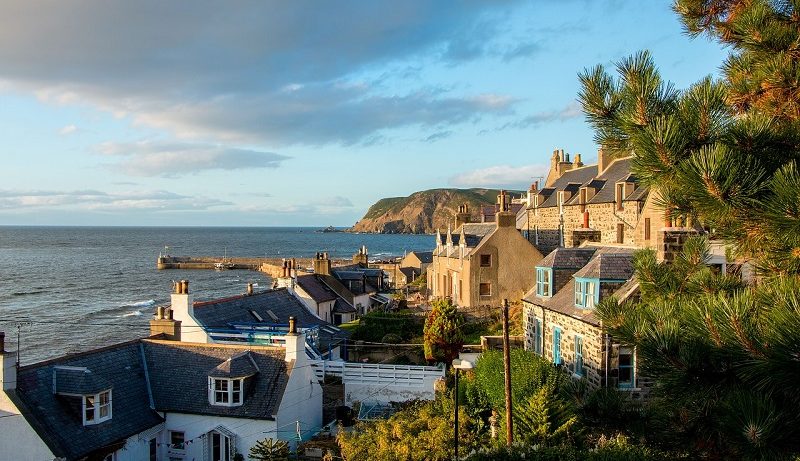 Gardenstown and Crovie are located on the Moray First Coastline in the North East of Scotland and are in the centre of Gamrie Bay. They are located some forty-five miles further north of Aberdeen and eighty-two miles east of Inverness.

National Geographic tourism experts voted the area of coastline as being one of the best in the world.  Indeed the area is known for its spectacular landscapes and picturesque villages.

People built Gardenstown and Crovie into the old red sandstone cliffs and the oldest part of Gardenstown, known as Seatown, is a tightly packed huddle of houses close to the sea and seeming to be hemmed in by the cliffs.  As more homes have been required, they have developed and layered further up the cliffs, and onto the ground above the cliffs.

Crovie is a small settlement 1.6 miles by road or a short but hilly walk along the cliff top is on the east side of the bay and linked to the centrally located larger Gardenstown.

Crovie was built on a remarkably narrow ledge between the base of the cliffs and the sea. Crovie is unusual and highly unique.  There is only room on the ledge for the cottages and a footpath in front of them, then the drop into the sea or rocky beach below.  Occupants of the cottages leave their cars in a car park on the outskirts of the settlement. Crovie has views across to Gardenstown.

Gardenstown was founded in 1720 by Alexander Garden as a fishing village, hence its name.  The surprisingly large harbour was once a busy fishing port.  These days it is now full of small creel boats and pleasure craft.  The area is populated by contemporary artists, and there are frequent art exhibitions.  It is an excellent place to sit and watch the sea life; it is possible to dolphins in the bay.

There is however evidence of human population in the area long before that; there is evidence of Neolithic or Bronze age settlements at Longman Hill and Cairn Lee nearby.

There is a Spar General Shop, a tea rooms and a few other shops at Gardenstown.  Crovie has an old fashioned red phone box.

A television series The Baron was filmed in and around Gardenstown in 2007.

So what makes it special?  The beauty and tranquillity of the place together with the unusual location.