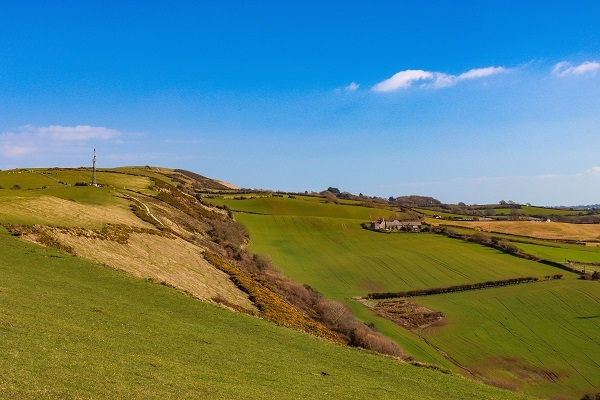 The National Trust has acquired a 7 kilometre stretch of coastline on Dorset’s Jurassic Coast, in an effort to preserve the region’s diverse habitats and wildlife. Weston Farm, in South Purbeck, encompasses 350 acres of land, which the charity aims to protect and restore using regenerative farming methods.

The farm is situated on the eastern half of St Aldhem’s Head, lying within Dorset’s Area of Outstanding Natural Beauty (AONB). It is home to some spectacular coastline, bursting with unique habitats which include grasslands, wildflower meadows, scrub and woodland.

The trust-owned ‘Purbeck Wares’, which lie to the east of Weston Farm, are famous for boasting some of the UK’s best grasslands for orchids and other rare wildflowers. Weston Farm itself is similarly diverse, with a quarter of its land already classified as a Site of Special Scientific Interest (SSSI).

“We aim to create a landscape that is richer in nature, so there’ll be no chemical inputs or regular ploughing on any of the land and life will be restored to the soil using natural regenerative farming methods,” said David Brown, National Trust Ecologist for Purbeck. “As the land is given time to rest and recover, the ground will store more carbon and streams flowing off the land will be cleaner and healthier.”

Haven for rare bats and butterflies

Over the next few years, the National Trust hopes to transform Weston Farm into a haven for some of the UK’s most incredible native species. In addition to applying regenerative agricultural practices, the charity aims to engage in active habitat restoration, through re-seeding and meadow management.

This will restore former arable land on the farm back to nature-rich meadows and grasslands, which will be carefully maintained by naturalistic grazing. This will bring back rare plants such as green-winged orchids and early spider orchids, as well as more common but equally important wildflowers such as cowslips and knapweeds.

The diversity of flora will, in turn, attract a whole range of wildlife. Rare butterflies including the Lulworth skipper and Adonis blue will thrive on the grasslands, say the Trust, alongside endangered skylarks, which will use the rolling fields for nesting sites. Areas of scrub and woodland will also benefit other birds such as yellowhammers, as well as small mammals.

On top of this, the farm is Dorset’s most important swarming site for bats, with thousands flocking to the region’s caves and abandoned stone quarries during the autumn. 15 of the UK’s native bat species have been recorded on the farm, and the area is crucial to the good health of populations of rare bat species such as the greater horseshoe and the barbastelle.

People to benefit, too

It’s not just the local wildlife who is set to benefit from the National Trust’s acquisition of Weston Farm, however. As the South West Coast Path runs along the edge of the farm, the charity is keen to allow walkers the space to enjoy and appreciate the natural beauty of the coastline, by moving the current field fences further back from the sea.

New footpaths will be created on the farm, linking up with those already established and making it easier to enjoy days out spent walking or birdwatching. As some fields will remain uncut to encourage wildflowers and insects, the Trust says they will also be used for seasonal camping.

“Nature recovery is at the heart of what we do, but so is connecting people with nature and the outdoors,” said Tracey Churcher, National Trust General Manager for Purbeckbirdwatching.

Work will soon begin on making these plans a reality, meaning it shouldn’t be too long before Weston Farm is a hit with wildlife and people alike.