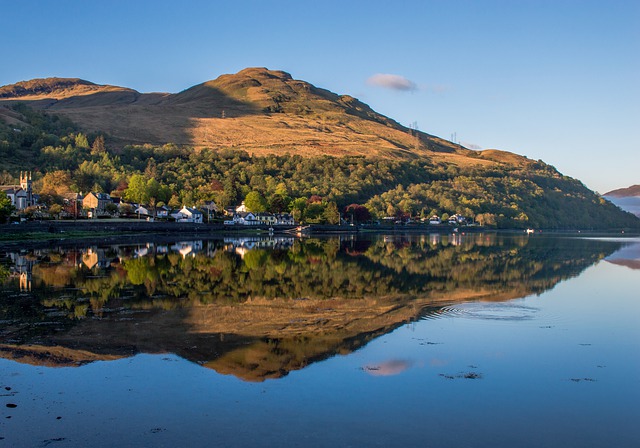 Loch Long is a 20 mile long sea loch that extends from the Forth of Clyde at its southern end to the villages of Arrochar and Succoth. Perhaps surprisingly, the loch is not named for its length, instead getting its name from the Gaelic translation for ‘Ship Lake’. This is a reference to the longboats used by Viking raiders as they targeted settlements surrounding Loch Long in the 13th century. The loch is often classed as a fjord-style sea long, due to its glacial formation. It lies on the edge of one of Scotland’s oldest national parks – Loch Lomond and the Trossachs – and is a popular destination for tourists, wildlife watchers and watersports enthusiasts alike.

The scenery is one of the main pulls for visitors, with the glassy waters of the loch being set against a backdrop of rolling hills and tall peaks. The Arrochar Alps lie just to the west of Loch Long and boast several of the highest mountains in the region – Beinn Narnain and Beinn Ime. For those looking for more gentle walks, the trails of Argyle Forest Park are ideal for short strolls through picturesque forest. Wildlife is abundant and the area is one of most diverse parts of Scotland, making it a perfect spot to see some wonderful species.

Monarch of the Glen

One of the species that calls the landscape around Loch Long home is the Red Deer. An iconic Scottish animal, the Red Deer is famous throughout the country and is often the posterchild of many tourist-related activities in the Highlands. It is one of the largest species of deer in the world, with Red Deer stags often weighing in at over 200kg. The antlers of the males can themselves weigh up to 5kg and larger specimens will grow to over a metre in length, making stags a particularly impressive sight. This was the inspiration for the famous “Monarch of the Glen” painting by Sir Edwin Landseer, which captured the majesty of the Red Deer stag.

The antlers are not just for show, however, and are used as powerful weapons during the Autumn breeding season. Known as the rut, this period during the year is characterised by the loud roars of stags as they compete amongst each other for the chance to breed. This can be a dramatic sound to hear while out and about and can travel for miles around. Outside of the breeding season, Red Deer tend to be less obvious but can still be seen grazing in large herds on the hills and in the glens. Top tip for spotting Red Deer around Loch Long: try hiking in the nearby hillsides and look out for groups of brown shapes in the surrounding landscape.

There is far more wildlife to be seen in and around Loch Long, as well as the area’s deer. The loch itself is home to an abundance of fish, including salmon and sea trout. The fish attract a range of other animals in turn. Ospreys can sometimes be seen swooping low over the water as they try to snatch a fish from the water, and lucky visitors might be able to spot an Otter crossing the loch. Both of these species were once rare sights around Loch Long, but Ospreys now nest in the area every year and Otters are making a comeback. Both squirrel species live in the forests on the edges of the loch, with Red Squirrels tending to favour the pinewoods and Grey Squirrels frequenting the deciduous woodland.

Within the loch, a range of coastal species are present, choosing to make the most of the sheltered waters. Birdwatching highlights include flotillas of Eider Ducks, as well as the occasional Cormorant – both of which can be seen hunting for food on the loch. Oystercatchers are also common and usually dominate the soundscape in the area with their piercing calls. Other species that can be seen in the loch are seals and porpoises, which are more than happy to venture a long way up the loch in search of feeding grounds. Loch Long therefore has a great deal to offer visitors, with its wildlife attractions being matched by beautiful scenery and a range of outdoor activities.