Home » Green Coast Award Beach and a Castle Nearby

Freshwater East is a village that is just three miles from Pembroke and is situated on a cliff overlooking the sheltered bay and out to sea.  The well-known tourist town of Tenby is about nine miles to the east.  The sandy beach is protected from the west by Trewent Point, a headland that is a Site of Special Scientific Interest (SSI).

Trewent Point is where we will begin:  Natural Resources Wales manage the  Point and its an area of biological and geological importance, having a different range of fauna to the rest of Wales and fossils date the region to over 400 million years old.

There has also evidence been found of prehistoric occupation to the east of the village and two iron age promontory forts, flint working floors and burnt mounds have been located there. 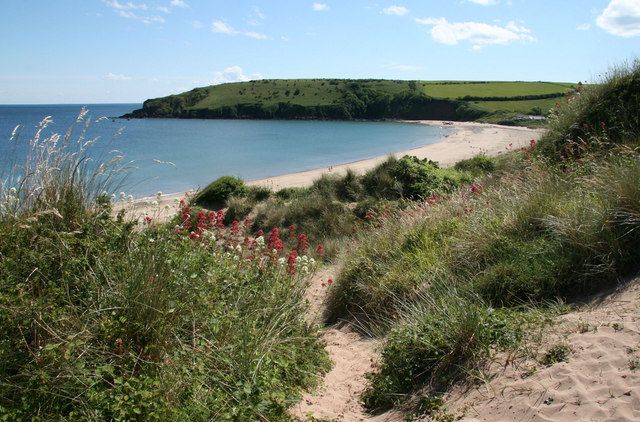 The beach is a sandy Green Coast Award Beach that is backed by dunes that are actually the Burrows nature reserve.  At the east side of the beach, some rocky sections create added interest and shelter.  The beach is popular in the summer months with sunbathers and swimmers and offers, parking a cafe and toilets. During the winter months, You can often see surfers practising there.

The positioning of the village means that there are far-reaching views both over the countryside and out to sea.  Many of the houses are contemporary and detached sitting in their own individual plots. Portclew, built around 1800, is said to be the oldest house. The roads in and out of the village are good and wide.  There is a good pub at Freshwater East and a bistro/cafe, but for shops and other conveniences, it is necessary to travel to nearby Lamphey which is about two miles away inland and has the facilities including a convenience store, post office, petrol station, pubs and sports facilities.

For history and heritage, just a little over three miles away by road to the east is the small settlement of Manorbier.

Manorbier has a castle and a church on opposite sides of the gently sloping valley just a short way inland from the small protected beach.  There’s also a Beer House and a dovecote below the castle walls.  There have been many archaeological finds and artefacts from the Mesolithic and early Neolithic periods. These include a burial chamber called King’s Quoit that is near the cliff footpath there.

What makes Freshwater East stand out as special is a combination of things: