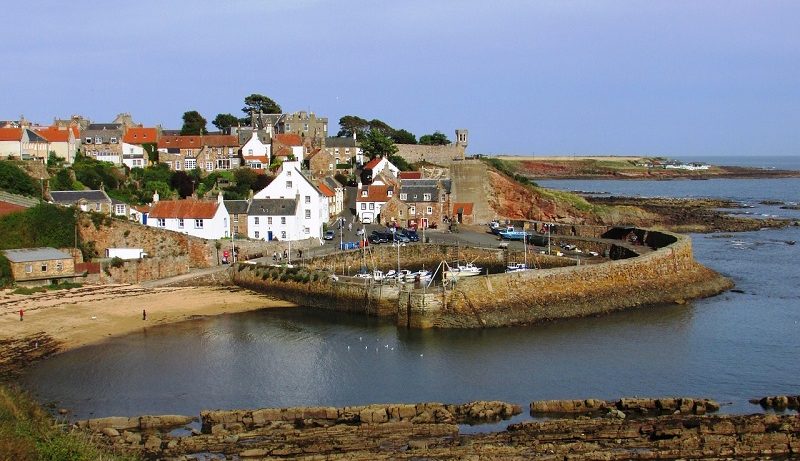 Crail is  23 miles south of Dundee on the east coast.

Crail is the most easterly of the old fishing villages along the south coast of the East Neuk of Fife, as well as being the oldest Royal Burgh there. The royal charter dates back to the 12th century and was granted in 1310 by Robert the Bruce giving Crail the right to hold a weekly market. The weekly market was held on the wide Marketgate Street, and its location is marked by the slender 17th century Mercat Cross topped by a carving of a unicorn.

There has been a church at Crail since at least the 12th century, making it one of the oldest places of Christian religion in Scotland that has been in continuous use. John Knox preached there in 1559.  Included or rather remaining in the churchyard is a mort house, which is an early 19th century building with the purpose of storing recently deceased people to protect them from body snatchers.  Bodies were put in there to rot for three months before burial to ensure that they were no use to body snatchers. Yuk!

The church known these days as Crail Parish Church but formerly St Mary’s and prior to that St Maekrubha’s is one of the most beautiful churches in Scotland and is unusual that it has an un-aisled rectangular nave and the spire and pillars are later additions.

Outside the church gate, there is a large boulder that they call ‘Blue Stane’ and it is said to have been thrown from the Isle of May by the devil; a circular depression on the stone is supposed to be the devil’s thumb impression.

Beyond the harbour, there is the ruins of a castle that belonged to King David I that fell into disrepair in the 16th century, and a new castle was built that is a private residence.

Crail harbour is beautifully engineered and benefits from two main breakwaters comprising of a long curving pier from the 16th century that is ocean side and a shorter straight pier that harks from 1826. The older pier was rebuilt by Robert Stevenson in 1828.

From Castle Walk, cobbled steps lead down to the harbour.  Market Street is wide and gives a feeling of opulence; this is where the weekly market would have been held.  The street is lined with attractive old houses of various sizes and styles.  Most of the houses to the east and to the west are contemporary, with the interesting ones being centrally located.

Facilities wise there is a convenience store, a Co-Op, pharmacy, tea rooms, takeaways, greengrocers, pottery and other boutique shops.

There is no doubt that Crail is a holiday location, the village is littered with holiday cottages, the main thing that makes it special is the beautiful church and its connection to John Knox.