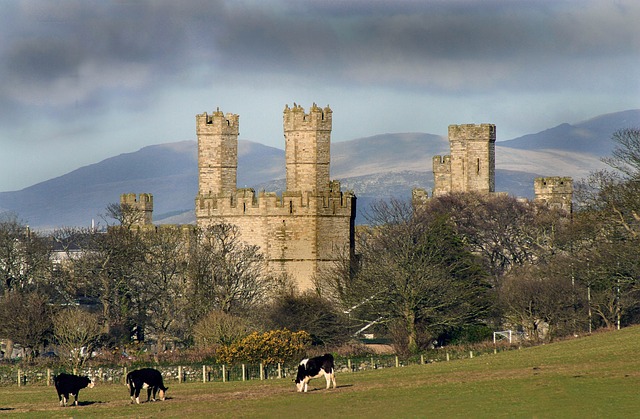 Located on the Menai Strait, the royal town and port of Caernarfon is small but bustling. With a population of only 10,000, the town has a long and illustrious history, drawing visitors from all over the UK and even further afield. The town also retains its Welsh character, with the majority of the population speaking Welsh as their first language. This makes Caernarfon a great place to experience true Welsh culture and heritage.

Whether you are looking to explore historical sites, take in the stunning views of Snowdonia, or just soak up the local culture, Caernarfon is worth a visit.

Caernarfon is an easy day trip from Bangor, just 8.6 miles away.

Caernarfon has a rich and varied history, dating back thousands of years.

The area has been inhabited since prehistoric times. During the Roman Conquest of Britain, a Roman fort called Segontium was established in 80 AD to subjugate the Ordovices’ – a Celtic tribe who lived here. By the late 11th century, William the Conqueror had arrived and built a castle as part of his Norman invasion of Wales. Ultimately he was unsuccessful; Wales remained an independent kingdom until around 1283.

During the 13th century, the ruler of Gwynedd – Llywelyn ap Gruffudd – refused to pay homage to King Edward I of England; what followed was the English conquest of Gwynedd and the resulting construction of Caernarfon Castle between 1283 and 1292. Centuries later, Caernarfon became a port town and a hub for the shipbuilding industry, which peaked in the late 19th century.

The town was awarded Royal Borough status in 1963 by Queen Elizabeth II; it has since achieved the amended title of Royal Town.

Caernarfon Castle is a majestic sight, nestled in the centre of the town. Envisioned by King Edward I in 1283, it was built in the 14th century and remains one of the Middle Ages’ most beautiful buildings.

Located on the banks of the River Seiont, Caernarfon Castle is a UNESCO World Heritage Site, as well as one of the best-preserved castles in Wales. The castle was built as protection from potential enemies and was part of Edward I’s ring of iron castles. Inside its impressive walls, there are many rooms and exhibits to explore, including the Legends of the Sky exhibit in the Eagle Tower, the King’s Gate and the huge Great Hall. Visitors can wander the grounds and learn about the castle’s fascinating history at the King’s Gate Exhibition. Audio trails allow for a fully immersive experience, delving deep into the castle’s military history, its royal link and the residing legends of King Arthur.

The castle has had many faces: a defensive fortification, a prison, a court, and now, a museum.

Built between 1283 and 1285, the walls have withstood the test of time and are still standing strong today. They encircle the old town of Caernarfon with a circumference of 730 metres and feature eight towers and two twin-towered gateways. In 1986, the town walls were declared part of a World Heritage Site, and now attract visitors from all over the world.

A section of the walls is now accessible to the public, providing a new perspective on the vibrant town below. Whilst wandering along the walls, tourists can marvel at the architecture whilst imagining what life would have been like during the Middle Ages.

Located by the sea, on the estuary of the Seiont river, the bustling harbour is home to a variety of boats and activities. The town has no beach, however, the harbour is a welcome alternative. Boat trips offer you the chance to see hidden coves and caves, or the local seal population and the thriving wildlife of the Menai Strait.

The harbour also offers plenty of water sports, such as paddle boarding, kayaking and canoeing. For a truly unique experience, the Queen of the Sea boat trip has been operating since the 1940s, led by the same family.

This charming town boasts many guesthouses, inns, restaurants, and shops. Within the town walls, you can find traditional and national retail stores as well as smaller independent stores. One of the most popular sites in Caernarfon Town Centre is Castle Square, or Maes in Welsh, which hosts a market every Saturday and Monday in the summer. You can also explore the many shops along Palace Street and Hole in the Wall Street, both of which are full of character and are situated right next to the castle.

The Black Boy Inn is one of the oldest pubs in Caernarfon Town Centre and has been inside the town walls since the 16th century. Many people also claim to have seen ghosts within the building!

The National Slate Museum is another popular attraction, where you can learn all about the history of Wales’ slate industry.

This fantastic 7-mile hike offers spectacular views of the surrounding area. The hike starts with a steep ascent up the ridge below Y Garn before it levels out; the path quickly descends from here, between Y Garn and Elidir Fawr, before changing to a steep rocky path up to the summit of Elidir Fawr. There is some scrambling involved on both mountains.

This hike should take around 7 hours to complete but rewards hikers with epic views.

This 9-mile circuit, which is estimated to take between 7 and 8 hours to complete, offers stunning views across the rugged landscape of North Wales. It takes you along three summits: Carnedd Dafydd, Carnedd Llewelyn and Yr Elen. Much of the path follows a dramatic ridge of cliffs and offers a thrilling scramble above the cliffs of Llech Ddu.

Snowdonia is a mountain range in Wales’ iconic Snowdonia National Park is close by, providing breathtaking views, incredible wildlife, and plenty of outdoor activities. The range boasts the summit of Snowdon, which stands at an impressive 3,560 feet and is about 10 miles southeast of the town centre. The area is a paradise for outdoor enthusiasts, with plenty of activities including hiking, mountain biking, and rock climbing.

The path follows the Anglesey coastline and south towards Caernarfon. On the South West side of the path, you will be greeted with stunning views of the Snowdonia Mountains, and a journey through beautiful Newborough Forest. The terrain of the path varies from easy to difficult and is therefore perfect for a casual stroll or more challenging climbs.

Caernarfon is a vibrant and exciting town, with a rich history and plenty to see and do. Whether you’re looking to explore the stunning scenery of Snowdonia, take part in some watersports, or just relax and enjoy the local culture, Caernarfon is the perfect place to visit.