Home » Clovelly – A unique, pretty location that everyone should visit at least once 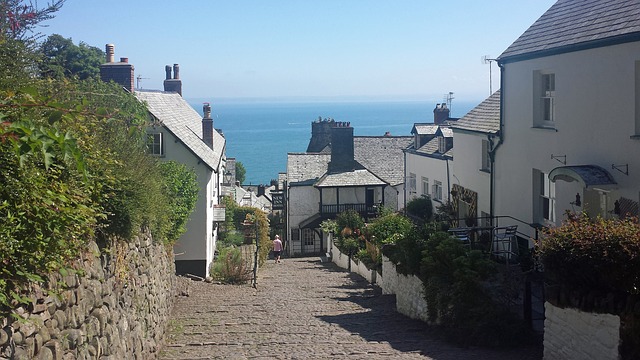 Clovelly is about 20 miles from Barnstable on the Hartland Devon Heritage Coast, which is one of the prettiest areas of the North Devon coast.  Clovelly is situated on a 122 metre cliff.

The thoroughfare to the harbour at Clovelly is foot traffic only; it’s a narrow, very steep, stepped in places meandering mostly cobbled path, with occasional handrails, not only to help those climbing up but also to assist those going down where the going is steep.  It’s a pretty place with lots to look at and lovely sea views and the sort of place that everyone should visit at least once.

All of the buildings on the main thoroughfare and a few others have listed building status, which means they have to be preserved as they are. Any internal changes requires permission from the listed buildings department.  The cottages are pretty, with flower baskets and pots, many have small shops incorporated.  There are restaurants and cafes, ice cream sellers and donkeys.  Yes, donkeys that were used to carry tired people back up to the top as well as goods up and down.  There are also sledges for the purpose of pulling things up and down the hill as well.

These day’s at the top of the village there is a visitor centre with a car park that charges for admittance to the museums and for parking as well as a ride back up the cliff via Landrover.  A visit to Clovelly without the visitor centre experience and without using their car park remains free of charge.

It is possible to drive down to the beach and the Red Lion Car Park via a very narrow road through the woods.

Clovelly was originally owned by William the Conqueror, King of England.  He gave it to his wife, and it started as a basic quay for the small fleet of mackerel fishing boats.  Changes of ownership saw the quay being replaced by a more substantial version built from stone and it is that 14th century quay that is there today.  At one time 9000 herring were being landed at Clovelly at a time.  The catch was taken up the steep cobbles in baskets by donkeys.

Clovelly grew up around the herring fishing industry, and today there are day boats that go out from its little harbour.  The donkeys no longer have to carry the day’s catch up the hill, the sledges are used for that while the donkeys relax in a nearby field.  They are now a tourist attraction.

Regarding the arts, Charles Dickens wrote about the area, the Victorian writer Charles Kingsley lived in Clovelly, and Rex Whistler included it in his work, William Turner painted the village.

Next to the 13th century Church of All Saints is a lovely walled garden – Clovelly Court Gardens with restored Victorian glasshouses and beautiful herbaceous borders.

To the northwest at Windbury Head is an Iron Age Hillfort.