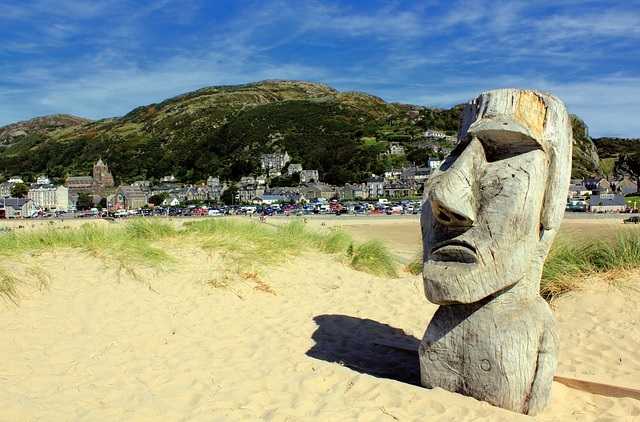 On the west coast of Wales, sandwiched between the picturesque mountains and the sea, lies a thriving little seaside town – Barmouth. Renowned for its long stretches of beach and traditional seaside feel, tourists flock to this town during the summer months. Barmouth otherwise only has a small population of around 3000.

Geographically, Barmouth is a gem. Located in the county of Gwynedd, it is a great base for exploring Wales, especially mid-Wales and the north. It lies where the estuary of the Mawddach river meets cardigan bay; It is also located on the southern side of Snowdonia, so the town has the spectacular backdrop of the famous mountain range. It is shielded from the elements from both sides. This makes the sea still and perfect for swimming, and the beaches are protected from wind and erosion.

The first record of this town dates back to the mid-16th century, in a 1565 survey of the Welsh coast, when it was then called Abermowe. During the 18th and 19th centuries the town grew significantly as an important hub for shipbuilding; the sheltered location of Cardigan Bay, shielded from the elements, made it the perfect location for this industry to thrive.

The slate industry also became prominent here and brought a lot of trade to the town.

The 19th century also brought tourism to what would become a prominent seaside resort. Notable figures such as William Wordsworth and W.G. Seabold flocked here for inspiration for their work, swapping the city for the crisp sea air and towering mountains.

After visiting, William Wordsworth himself gave glowing praise to the town: “With a fine sea view in front, the mountains behind, the glorious estuary running eight miles [13 km] inland, and Cadair Idris within compass of a day’s walk, Barmouth can always hold its own against any rival.”

Nowadays, the seaside resort has only grown and its main trade is tourism.

The old town is defined by its steep cobbled streets, slate-roofed houses – an ode to its past slate industry – and historic buildings. A lesser-known attraction is the Ty Gwyn tower house – ‘white house’ – built in the 1460s. A deceptive name, this house is thought to be where Henry Tudor hid during the War of the Roses in the 15th century. He would later become King Henry VII. Now a museum, it is open April through October, between 1 and 4 pm. Another notable relic of the town is the Ty Crwn roundhouse prison. This small 2-cell building was built in 1833 to house local drunks and nuisances. It was designed to be perfectly circular so that ‘the Devil would have no corners to hide in.’

Northern end and the promenade

The main attraction of Barmouth is the seafront, which embodies the feel of a traditional seaside town. Tall Victorian buildings line the seafront, broken up by large arcades and other attractions. The promenade is packed with your typical fish and chip shops, a hoard of souvenir stalls and cafes for all your needs – from fancy barista coffee shops to your ‘greasy spoon’ all-day breakfast. There is also a funfair that operates from March to October, perfect for families.

The main attraction of this seaside town is, of course, the beach. The largest beach is called Abermaw, a west-facing beach that stretches far and is made of sand and fine shingle. The location in the sheltered Cardigan Bay means that the beach is perfect for both swimming and water sports.

The craft exclusion zone makes the beach very swimmer-friendly; the coast has achieved blue flag status for its exceptionally clean water. It is potentially one of the best beaches in the UK for swimming.

It also has a great view of the nearby Bardsey Island, a decently sized dog-friendly section and disabled access.
A local kite festival is held here at the start of July every year.

What else is there to do?

There is plenty more to experience in this beautiful town.

The wooden Barmouth bridge is an unlikely attraction. It connects Barmouth and Fairbourne, a neighbouring seaside village; Many people walk across for its stunning views – it is worth checking out.

The heritage trail documents some of the town’s most significant historical locations for visitors to explore; you can grab a corresponding map from the tourist information centre or in various guesthouses around the town.

The town is surrounded by many trails and is the perfect base for the more adventurous.

There are many walks along this coastline and in Snowdonia National Park.

One of the most significant is the Dinas Oleu walk. This short walk snakes through the old town and leads up to Dinas Oleu cliffs. Here you can visit a small walled structure, known fondly as the Frenchman’s Grave; it is the burial place of Auguste Guyard, a French philosopher. He fled France in 1870 – during the Siege of Paris – and ended in Barmouth.

The panorama walk is a 4-mile circular route beginning and ending in Barmouth. The first part of the route is suitable for beginnings and leads to a viewpoint with panoramic views over cardigan bay.

The Mawddach Trail is another, more accessible route in the area. 9 miles long, it follows the Mawddach estuary perpendicular to the coastline and is also a popular cycling route.

Barmouth is great for cycling. The town is located on Route 8 of the National Cycle Network, which means there are many good-quality trails.

Every September, the Barmouth Walking festival takes place. Over ten days there are over 35 guided walks on offer, including lesser-known trails.

Sailing is one of many activities in Barmouth; This town is the starting point for the Three Peaks Race.

Every June, participants spend around four days sailing from Wales to Scotland whilst summiting the three highest mountains in the UK on the route. They will run up Snowdon and Ben Nevis before cycling up Scafell Pike.

The race has been ongoing since 1977 and attracts people from around the UK.