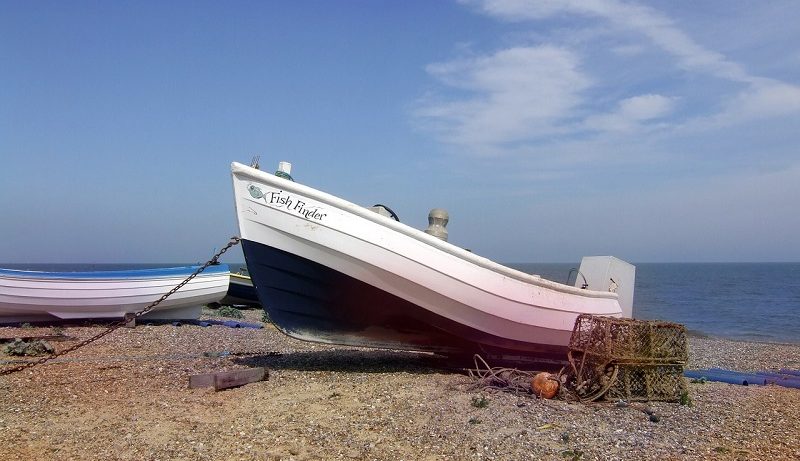 The Suffolk coastline stretches along the eastern coast of England between the small town of Cattawade and the port town of Lowestoft. Bordering the North Sea, the coast is characterised by its rather beautiful and tranquil nature, with only a few coastal towns being separated by many miles of marshland, woodland and lovely beaches. There are also a couple of tidal inlets, as well as some sections of low cliffs. This coastline is a popular tourist destination, particularly during the summer months, who are attracted to the area not only due to its coastal nature, but also for its remoteness and tranquillity.

The southern end of this coastline borders two large tidal inlets – the River Stour and River Orwell – both of which are the result of small river valleys being flooded by the rising sea at the end of the last Ice Age. The Suffolk coast runs along the northern edge of the Stour inlet, which forms a divide between the Suffolk and Essex county border. At its mouth with the sea, the Stour meets the Orwell inlet, which links the North Sea with the port town of Ipswich.

This is the largest settlement along the Suffolk coastline – as well as containing some small industry along the head of the inlet, there is also a recreational marina. However, where the Stour and the Orwell meet the North Sea exists another port – Felixstowe – which is renown for its container port. However, to the north of these industrial areas, the Suffolk coastline is far more rural and natural.

The section of coastline between Felixstowe and Aldeburgh contains some interesting features. The beaches here consist of shingle – and in high abundance. This is very apparent at Orford Ness – a name given to a 14km (8 mile) long natural shingle spit that stretches between Shingle Street in the south and Aldeburgh in the north.

The spit, however, almost ‘hugs’ the coastline – it is only attached to the mainland at its northern end, but it does not protrude out into the North Sea. For most of its length, the shingle bank is split from the mainland by the River Alde, a tidal inlet which runs almost parallel to the coast, until it reaches Aldeburgh, at which it makes an almost 90-degree turn inland.

Due to the shingle and nearby marshland habitat, this feature is a National Trust nature reserve, and contains a diverse range of animal species, in particular numerous bird species [1]. However, this area has other importance for the United Kingdom – during both World Wars and the Cold War, this area was used for secret military tests. These included experiments in long-range radio navigation and radar during the 1920s and 30s, and a joint venture in the 1960s, in which an experimental over-the-horizon radar was built on this peninsula. Many of these buildings remain, including a radio navigation tower known as the ‘Black Beacon’ and various pagoda-like structures that were used to test nuclear components.

The small resort town of Aldeburgh is located just to the north of Orford Ness. With its picturesque painted buildings and numerous hotels and restaurants, this is a rather peaceful and quiet resort town – you won’t find a funfair here, but there is a local museum and a nice sandy beach. The coastline to the north of here is markedly less shingly, and is characterised by sandy beaches, with the presence of woodlands and marshland.

For example, at Minsmere Nature Reserve, a large marshland contains many bird species, as well as reed and grass types [2]. Dunwich Heath, however, contains an expansive and rather beautiful-looking area of purple heather. There are also pockets of deciduous and coniferous woodland at this location; these typically surround the coastal village of Dunwich, and provide a great habitat for many animal species, in particular birds. This area is also rather remote and tranquil; there are no nearby large cities, which makes for a rather nice and peaceful holiday destination.

Between Dunwich and Southwold exists more marshlands, which are known as the Dingle, Westwood and Corporation Marshes. However, to the north of these is the incredibly picturesque holiday resort town of Southwold. A popular destination for people wanting a quiet getaway, this town is filled with small, quaint seaside houses, and including a working lighthouse and a long, sandy beach with various beach huts along the promenade [3]. Notably, Southwold is a rather peaceful, quiet town – in other words, like with Aldeburgh to the south, don’t expect to see a loud amusement park at this town.

The stretch of coastline between Southwold and Lowestoft is rather similar to the coastline throughout the rest of Suffolk. However, it is worth pointing out that there are intermittent low cliffs that reach several metres above the sea along this section of the coast. Since these cliffs are predominantly made of clay, they are highly susceptible to coastal erosion – it is therefore a common sight to see the remnants of trees, that have been brought down from the adjacent coastal woodland, laying on the beach.

The small village of Covehithe is particularly vulnerable – a small road runs from the village towards the sea, where it abruptly ends directly at the edge of the cliff. It is a matter of time before the village also succumbs to its fate [4].

Around 5km (3 miles) to the north, we lose the cliffs, woodland and marshland to the coastal towns of Kessingland and Lowestoft. The former town is rather small and quiet, and contains a large sandy beach known for fossils and archaeological discoveries, which include stone tools up to 700,000 years old, and the remains of an ancient forest [5]. On the contrary, Lowestoft around 6km (4 miles) to the north is a much larger and more bustling port town, with a harbour surrounded by various warehouses. It is famous for being the most easterly town in the United Kingdom, and the more easterly point along the British coastline – Ness Point [6] – is marked with a small circular viewing platform known as the ‘Euroscope’. The town itself has a small touristy bit – the beach at a small adjoining town known as Kirkley includes a promenade, hotels and a small pier.

To the north of Lowestoft is another low cliff section – Corton Cliffs – above which the coast is flanked by holiday homes and caravan parks. There are also intermittent sand dunes between the cliff and the sandy beach. This is very close to the border between Suffolk and Norfolk, which is located about 5km (3 miles) north of Lowestoft.