Home » The Kingdom of the Eastern Angles

Situated on the East Coast above Felixstowe and below Lowestoft in a region known as East Anglia, Dunwich is an isolated village on a stretch of coastland close to RSPB Minsmere.

Depending on which way you choose to travel to the village; Dunwich is accessed either by a narrow lane that crosses attractive heathland with bracken and scrub and some mature trees or through Dunwich Forest.  The houses and cottages are well spread out, well kept and mainly lovely old traditional red brick. A local landmark is the white painted Coastguard Cottages at the National Trust’s Dunsmoor Heath Beach.  It’s about two miles from the village beach entrance and has a cafe, making the cottages a nice place to walk to, stop for a drink and stroll back. 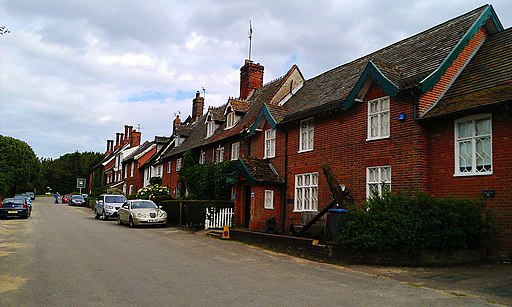 Dating back to Anglo-Saxon times this tiny village was once a city, the capital of the Kingdom of the Eastern Angles, a seat of power for the Anglo-Saxon bishops for centuries and an international port.

The beach is offset by the low crumbling grassy cliffs.  Comprising od shingle and sand, being mainly sand to the north and shingle to the south and the beach

The Norman Church of St James is a pretty village church and where you’ll also find the Leper Chapel remains.  The ruins of Greyfriars Abbey are a poignant reminder of the ancient city that is now under the sea.

What makes Dunwich special apart from its beauty is that it remains small unobtrusive,  mainly off the tourist map, making it a place where at times you can experience real solitude on the heath or on the beach.  Despite this, it is quite rightly within the Suffolk Coast & Heath Area of Outstanding Natural Beauty.

Of course, there is the history regarding the storms in the 13th and 15th centuries that put the old settlements that date back to the Iron Age, under the sea. The storms ruined the harbour, causing a loss of income that twice put the place into decline.    When investigating under the sea, scientists have found churches, a toll house and shipwrecks as well as the remains of the old port.

The Museum offers a detailed model of how Dunwich looked at its peak with history scanning through Roman, Saxon, Medieval, Elizabethan Jacobean, Georgian and Victorian times through exhibits and helpful staff.

Dunwich is a great place for sitting on the beach and watching the sea, looking out for seabirds or strolling along the quiet country lane, the beach or heathland.

The pub has a good reputation for good food and customers can enjoy views out to sea and across the marshes.

A short drive away is the RSPB site Minsmere where you can view some of Britain’s rare birds and animals including Avocet, Bittern, Red Deer and Otters.