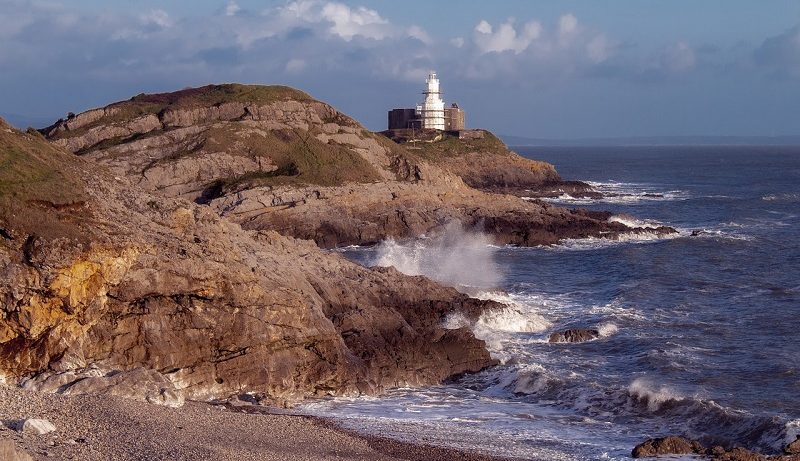 The village of Mumbles is named after the headland of the same name, and it is now part of the urban sprawl of Swansea that still retains its village atmosphere.

The archaeological interest in the area is vast; there is evidence of now submerged ancient forests; there are bones of bears, wolves, rhinoceros, mammoth and more discovered there.  The bones of sixteen ice age mammals have been found scattered around the area, and this includes the tooth of a mammoth that is ten centimetres wide that is on display in nearby Swansea Museum.

There is also evidence that the Romans were based in Mumbles.  Workmen discovered a Roman mosaic floor when they were extending the site of the present All Saints Church in Oystermouth. There is evidence that it was also previously a pagan site.

The Norman Castle at Oystermouth was built during the first half of the 12th century and boasts the best views in Wales!  It does sit on a hill top, like so many others and features include ancient graffiti art from the 14th century.  There are secret staircases to explore and a 30 foot high glass bridge.

The Mumbles lighthouse was built on the outer of two tidal islands off the Mumbles in 1793 and can be viewed from the mainland.

Mumbles has long been a popular tourist destination, due to the railway that was originally installed to carry coal.  As a result of the popularity, the railway was extended closer to the shore and a pier built as a terminus.  Later in the early twentieth century, a slipway was added to the pier for the Lifeboat, and a boathouse was created. The Lifeboat remains a valuable resource in the area, and in 1948 a crew of eight was lost from there attempting to rescue the crew of the MV Samtampa that had run aground on rocks.

The pier is open to the public and includes an amusement arcade, a fishing deck and bowling alley.  It is currently undergoing refurbishment.

Nest to the pier is the little sandy south-facing beach that offers views of the two islands, the lighthouse and as far as North Devon.

The poet Dylan Thomas is linked to Mumbles as spent a lot of his time in the Mermaid pub.  Other famous people include the actress Catherine Zeta Jones who grew up there from the age of twelve, the archbishop of Canterbury Rowan Williams, and Ian Hislop the editor and satirist from television was born there.

Mumbles offers a few pubs, some lovely boutiques and galleries, salons and health spars as well as cafes and restaurants.  Because of its proximity to Swansea, there shops nearby that are accessible for everything you’d need.  The village has a rugby club and a cricket club too!

Mumbles has a lovely park inland – Underhill Park and a nature reserve on the headland.  Despite the link to Swansea and the urban sprawl of the villages in the area, there is still farmland nearby, and once you are at the seafront/pier area of Mumbles, all else will fade away.